You are here: Home / Our Speakers / Barbara Van Orden 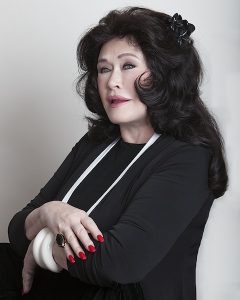 Barbara Van Orden is a walking miracle – both literally and figuratively. In 1982, as her modeling career was blossoming, Barbara was struck by an epileptic driver while crossing the street, resulting in 12 breaks in her right leg, five breaks in her left leg, internal bleeding, a crushed back, broken ribs, a fractured disk in her neck, and three- and four-inch gashes in the front and back of her skull.

Barbara’s career began in the Catskill Mountains in New York at Grossinger’s Hotel. She went on to perform at some of the Playboy Clubs, opening for talents such as Morey Amsterdam and Soupy Sales. Barbara was invited to perform in Vegas, where she was introduced to Frank Sinatra. That meeting led to her doing a club date, opening for Mr. Sinatra at the Persian Room in the Plaza Hotel in New York City.

After the accident in 1982 cut her performing plans short, Barbara endured the arduous task of learning to walk again. After countless hours of therapy, multiple intricate surgeries, and three hours a day, five days a week at UCLA’s rehab center, Barbara was finally able to take a few tentative steps.

Through sheer grit and determination, Barbara has resumed a career in the entertainment business. She began a personal management company in Century City representing writers, producers and actors. After selling her company, she devoted her energy to film producing and packaging. Barbara and her late husband, Stephen Heilpern, himself a producer of numerous TV series, were asked by Universal Studios to form their own production company, Cinequest, which they did on the Universal lot.

Barbara has the unique ability to rise above any and all challenges. She learned to walk again, she battled the insurance companies, and she had the fortitude to rebuild her life and career. She believes there’s “no time to sit around and feel sorry for yourself.” She is a true survivor who embraces each day with hope. Her story will lift your heart – her words will inspire you to go the distance and never, ever let the circumstances life throws at you keep you from achieving your goals.